was supposed to be for Robert Havard, family doctor to the Lewises and Tolkiens, and occasional Inkling.

But I find I have no specific anecdote about him and, instead, have yet another reason to wonder what is in the air in 2016.

I'm referring to the news about Prince -- it broke yesterday around dinner time our time.

Of course, with Prince, you can't go running to the Internet to listen to all the songs you remember and various albums one after another (as I did with Bowie. I wouldn't need to do this at all if all our CDs and tapes weren't in storage!). If you search for Prince at all on YouTube, you get, on the first page, some rather disturbing results and not a single one of his songs.

After some more searching through Google, I managed to find a Polish site that had a copy of the official video for Diamonds and Pearls (I was about 13 when this song came out), and another suspicious looking site had The Most Beautiful Girl in the World.

One thing that was entirely new to me: Prince wrote a song about the vineyards in our canton! It's called Lavaux, and was featured on the album 20Ten, the one given away with various newspapers and Rolling Stone. 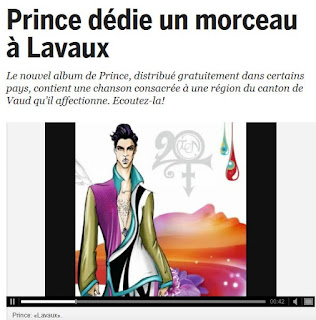 You can still listen to the song on the 20 Minutes website, but I've got no way to link to it here. But I can feature the lyrics: 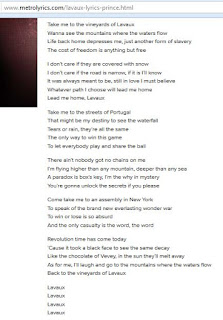 One of the historians I follow on Twitter was suggesting we should make a roll of the dead (I never even mentioned Victoria Wood, among others, on the blog) in Old English, as the list keeps expanding and maybe this will help make it all seem more elegant and story-like.


What songs have been stuck in your head recently?

sage said…
Purple rain and partying like it's 1999... There have been a lot of iconic deaths lately, but with Prince it hits harder because he's actually a wee bit younger than me.
22 April 2016 at 10:30

Hilary Melton-Butcher said…
Hi Deniz - I saw a couple of tv programmes (snippets) about him and how he was so far advanced in his thinking about the net - he didn't want his work out there being plagiarised and bastardised by people who thieve and sell make a profit from others ... sorry that's not quite 'right' - but you'll understand what I'm saying ...

It was really fascinating to learn a bit about Prince ... especially how technically advanced and far reaching his thoughts were re his brand etc ...

I mentioned a few other deaths in my latest post ... what interests me is that we appreciate more their early death (because they were too young) ... as we're living in their era - we'll understand more and know more .. whereas those who die in 20 years time or 30 years .. time will have faded them and their achievements.

The other thing that surprised me about Prince - was how quickly it all happened ... died, autopsy, released to family, cremated ... and other than knowing how he died - that's it. Yes his music will live on ... and thankfully he didn't appear to have any hullaballoo going on - as per Michael Jackson or Elvis ...

Deniz Bevan said…
I know, I was thinking that exactly -- all of a sudden these deaths hit home because we lived with these people for so long...creating and shaping our cultural world...and now they're gone.
It's kind of sad that suddenly, since he's died, people have been sharing his stuff all over the place. He kept such a tight rein on that. Wonder what'll happen in the next few weeks?
25 April 2016 at 08:25