is for University of Oxford.

I feel badly that I don't have new photos to share. We've been talking about taking a quick weekend trip to revisit Oxford; I'd especially like to see the parts I haven't gone to yet, including a visit to Tolkien's grave, a visit to Lewis' grave, a drink at the Mitre, a drink at the Lamb and Flag, afternoon tea at the Eastgate hotel...

Until then, though, I leave you with two quotes from Tolkien's collected letters:


During the war, Tolkien was involved in teaching forces cadets at the university, on the wartime 'short courses'. He reports in a letter to C. S. Lewis on a fellow teacher, M. R. Ridley, who was "astounded at the ignorance of all 22 cadets" and adds in a PS:

"Ridley's first question in the test-paper was a group of words to define -- apposite, reverend, venal, choric, secular, and a few others. Not one case got any of the words right."

If I'm being completely honest, I have no idea what venal and choric mean. Looking them up in the Oxford English Dictionary, I don't feel as badly; they're from Latin and Greek, respectively. I never had a classical education, after all.

Here's Tolkien on children and adults and vocabulary, from a draft letter to New Statesman:


"Life is rather above the measure of us all (save for a very few perhaps). We all need literature that is above our measure -- though we may not have sufficient energy for it all the time. But the energy of youth is usually greater. Youth needs then less than adulthood or Age what is down to its (supposed) measure. But even in Age I think we only are really moved by what is at least in some point or aspect above us, above our measure, at any rate before we have read it and 'taken it in'. Therefore do not write down to Children or to anybody. Not even in language. ... An honest word is an honest word, and its acquaintance can only be made by meeting it in a right context. A good vocabulary is not acquired by reading books written according to some notion of the vocabulary of one's age-group. It comes from reading books above one."

Reminder: Don't forget to keep commenting, for your chance to win in my 1000 posts contest!

And don't forget to support our A to Z hosts, who've been doing such a great job! 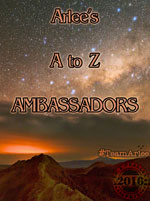 Tim Brannan The Other Side blog  @timsbrannan

Hope you all enjoy the last week of the challenge!

betty said…
I too wouldn't have known what those words meant :) Great theme you have going through the challenge! Hard to believe we are so close to the home stretch!

Eden "Kymele" Mabee said…
Though I probably would have gotten the words wrong, I'd have guessed that venal meant something related to the flow of blood/life/ideas (like veins); and choric would have to do with voice.

I never had a classical education either... (so now I'm off to check to see how badly I did: wow... completely off on 'venal', though better on choric).

When I went to Oxford, I didn't do any of those things either... Someday, dreams of England again. No pictures is okay... sometimes it allows for dreams of individual natures
25 April 2016 at 11:35

Patrick Stahl said…
The second quote is very interesting. I regard the various age groups for books (picture book, chapter book, middle grade, young adult, new adult, and adult) as distinct artforms. Even still, I would only write a story in such a way that the "right words" line up with the capacity of the audience I'm writing for.
25 April 2016 at 13:01

Karen Baldwin said…
Ha! I never liked the books my mom got for me such as the Nancy Drew mysteries. I saw that my mom read certain books but hid them. On a few occasions I snuck into her room and found the books. One was The Carpetbaggers. Phew! I learned a lot at 10. I guess that was reading above my age group.
25 April 2016 at 15:04

Deniz Bevan said…
I thought of that for venal, too, Eden. Guess I really don't know much Latin!

Ooh, that sounds like me, Em, reading VC Andrews and Sidney Sheldon at the age of 12! I'm still weirded out by My Sweet Audrina!

Hilary Melton-Butcher said…
Hi Deniz - I'd have struggled with those now ... yet I must have picked up my language from somewhere ... I remember in South Africa decades ago - a friend said 'ooh listen to her - those long words' ... I'd no idea - they just come out. Funny how we learn ... I'm definitely a late learning bod.

I'd love to go to Oxford and just have a wander around for a week or so - visiting old haunts, seeing places you've referred to etc ... you'll get there - but I'm loving the vicarious glimpses I get to see or think about ..

Deniz Bevan said…
Funny how that happens, Hilary. Some words I only know from books, and later I find out I've been pronouncing them wrong!
27 April 2016 at 07:25