is for World War I.

The 100th anniversary of the Battle of the Somme is this summer.

While at King Edward's School in Birmingham, Tolkien and three friends, Rob Gilson, Geoffrey Smith, and Christopher Wiseman, formed an unofficial and semi-secret society called the TCBS (The Tea Club and Barrovian Society name alluded to their meeting spots -- tea in the library (which was not permitted) and Barrow's Stores near the school).

They kept in touch after leaving school and, following a "council" of the TCBS in 1914, Tolkien began devoting more energy to writing poetry, thanks to the shared ideals and mutual encouragement of the Society.

Tolkien, Gilson, and Smith were at the Battle of the Somme. On leaving, as he crossed the English channel with his battalion, Tolkien wrote a poem called "The Lonely Isle", a haunting verse subtitled "For England".

(Other interesting stories in and around Tolkien's war time experiences are in Tolkien and the Great War by John Garth, and on Garth's website.)

This is the reason for the line in the introduction to The Lord of the Rings refuting the suggestion that the story is an allegory of World War II: "To be caught in youth by 1914 was no less hideous an experience than in 1939... by 1918 all but one of my close friends were dead."

Another intriguing character from this time is H. B. K. "Rex" Allpass, who witnessed a friend's suicide, and then was lost on a battlefield in World War II. There are so many story possibilities hidden in these very brief details...

Tolkien, in a letter to his son during World War II, had this to say on refugees and the general misery and destruction: 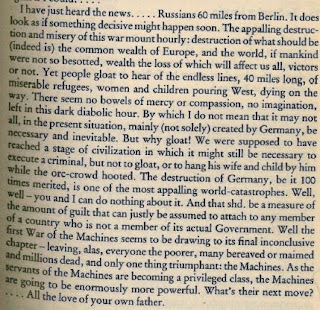 It all seems just as relevant now, sadly.

Since my goal for the last little while had been to try to read all the books we already own, before I got to attend the Library in English book sale, and since the sale happened last week (more to come in tomorrow's post!), I needed something more concrete as a goal, to at least make me feel less guilty about not editing.

With that in mind, I volunteered as a sponsor for the current ROW80 round!

I've got to write a -- hopefully -- inspiring post for the official site. My last sponsor post was way back in 2011!


Don't forget to keep commenting on posts, for your chance to win in my 1000 posts contest!


Have you reshuffled your goals lately?
What projects are most important right now?

Karen Baldwin said…
..."and only one thing triumphant: the Machines." Such a telling thought, and yes, still relevant today. The servants of the Machines are very much a privileged class.
My goals are to keep plugging along to get my one manuscript published and stay focused.
27 April 2016 at 07:54

Alex J. Cavanaugh said…
Sad he lost almost all his friends in the war.
Rock on with that inspirational post!
27 April 2016 at 09:25

betty said…
That is sad about his friends dying in the war. It seems weird to think of the 100th year anniversary coming up.

Anonymous said…
Eep! Reading all the books we own would be quite the chore. I've read most of them, but there are still several I haven't read or haven't read all the way through.

Hilary Melton-Butcher said…
Hi Deniz ... “There seem no bowels of mercy or compassion, no imagination, left in this dark hour … “

History of War – history doesn’t change – Wars are always there … “The destruction of Germany, e it 100 times merited, is one of the most appalling world-catastrophes …”

Great writers have that incredible sense of place, of sensitivity, and of expression to get their view over … which reading 100 years later still rings so true … as you mention.

It is devastating … so sad, so real … thanks for these great posts – and now another goal – that’s a good one it’s writing!

sage said…
War had an impact on that generation unlike anything experienced on this side of the Atlantic (maybe more like what was experienced in the Civil War, where so many died).
28 April 2016 at 09:25

Deniz Bevan said…
Transcription:
"I have just heard the news. ... Russians 60 miles from Berlin. It does look as if something decisive might happen soon. The appalling destruction and misery of this war mount hourly: destruction of what should be (indeed is) the common wealth of Europe, and the world, if mankind were not so besotted, wealth the loss of which will affect us all, victors or not. Yet people gloat to hear of the endless lines, 40 miles long, of miserable refugees, women and children pouring West, dying on the way. There seem no bowels of mercy or compassion, no imagination, left in this dark diabolic hour. By which I do not mean that it may not all, in the present situation, mainly (not solely) created by Germany, be necessary and inevitable. But why gloat! We were supposed to have reached a stage of civilization in which it might still be necessary to execute a criminal, but not to gloat, or to hang his wife and child by him while the orc-crowd hooted. The destruction of Germany, be it 100 times merited, is one of the most appalling world-catastrophes. Well, well -- you and I can do nothing about it. And that [should] be a measure of the amount of guilt that can justly be assumed to attach to any member of a country who is not a member of its actual Government. Well the first War of the Machines seems to be drawing to its final inconclusive chapter -- leaving, alas, everyone the poorer, many bereaved or maimed and millions dead, and only one thing triumphant: the Machines. As the servants of the Machines are becoming a privileged class, the Machines are going to be enormously more powerful. What’s their next move?”
2 May 2016 at 10:15