Z is for Tolkien Photo Challenge Part 3 of 3 and 1000 Posts Contest Last Day! (A to Z on Tolkien and the Inklings)

is for Z end of the list and the third and final part of the #TolkienCollection Photo Challenge!

Here's part three of the #TolkienCollection:

15. Item you consider to be a must-have for every collector -- authorised editions of the books, of course! I don't mind collecting other editions, but during my annual rereads I only ever read the 50th anniversary edition, since it has most of the typos and errors corrected. I'd like to get the 60th anniversary edition...

16. Top three items you'd take on an adventure -- The Lord of the Rings and copies of The Lost Road and The Notion Club Papers plus some of the poems. Also the original Caedmon recordings. Is that a lot of books to carry in one's backpack? Maybe, but I've always done that -- carried more books than clothes or other items, everywhere I go!

17. The oldest item you own -- maybe the hardcover The Lays of Beleriand? No, that one isn't a first edition or even a first printing, so it must be my dad's copies of The Lord of the Rings from the 1970s and the biography of Tolkien from the same decade.
Besides the truly rare (like the recent discovery of a Tolkien poem called Noel), there are few items that were actually published in Tolkien's lifetime. To own something old, then, would mean first editions or printings of The Hobbit, Mr Bliss, The Lord of the Rings, Farmer Giles of Ham, and a couple of other items. Maybe one of those letters or postcards that comes up at auction once in a while.
I don't own even a copy of the first edition of The Hobbit, with the original Riddles in the Dark chapter! Must get on that...
Cursory research shows I can get one of the original 1, 500 copies, first impression of the first edition, published 21 September 1937, for only 12,000$. Perhaps we could sell our car...

18. An item it took you a long time to obtain -- just started this year, purchasing items I've known of for ages but somehow never bought before! I've gotten Bilbo's Last Song, a copy of The Devil's Coach Horses, Tolkien's brother Hilary's book Black and White Ogre Country, and so on. I'm still missing two major items: the original Pictures by J. R. R. Tolkien, and the Tolkien Family Album by Priscilla Tolkien. Hammond and Scull also have two massive companion tomes out that I really want (who can resist a big fat book?).

19. An impulse buy -- a few months ago I got a print of Pauline Baynes illustration from The Chronicles of Narnia, signed by Baynes! Okay, so that's not a Tolkien work, but...


20. Your choice -- I ought to have taken a photo of this to share. I have a notebook I started writing in about 20 years ago, where I kept lists of interesting words Tolkien used, doodled line drawings of the walls of Minas Tirith (this has been one of my stock doodles since about the age of 12), copied out some of the poems, and worked over and over again on translating Errantry and a couple of other poems into Turkish. 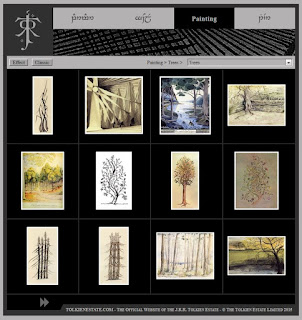 It seems as though many people have stock doodles. When you're sat in a meeting and trying to concentrate, and you pick up a pen or pencil... Besides Minas Tirith, mine feature geometric shapes, sunset on a sea, a branching tree (another Tolkien-inspired item), a cat silhouette, fish outlines, and a few other bits and pieces. 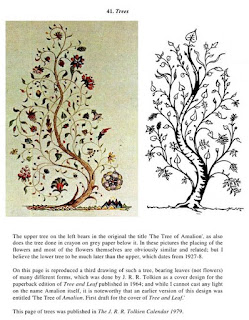 Tree of Amalion and Stylized Tree, from Pictures by J. R. R. Tolkien

Here's to the Blogging from A to Z Challenge and all the hosts, participants, and commenters!

You can still keep commenting on all the R to Z posts, for your chance to win in my 1000 posts contest -- The winner will be drawn this weekend and announced on Wednesday!

What kinds of doodles do you draw?

sage said…
My drawings: houses, mountains, streams, canoes, sailboats, kayaks. Thanks for all the information you've supplied about Tolkien in the A-Z challenge!
30 April 2016 at 07:41

Karen Baldwin said…
Enjoyed reading your posts. Are you glad the challenge is over? My doodles always are of spirals, triangles and stars. In the last few years I've learned that spirals are sacred geometry.
30 April 2016 at 10:41

Eden "Kymele" Mabee said…
One thousand posts... and a whole bunch of Tolkien! Yeah... don't think I can raise $12000 even with selling the car (and know hubby would not approve), but I want to hold one of those books!)

Love your stock doodles... I never thought of them that way. Most of mine seem to be random, but I draw cats and dingbats and birds... and this horse-like thing made out of irregular geometric shapes.

Deniz Bevan said…
Thanks to all of you for coming by the final A to Z post!

Hope you get a chance to read the other Hilary's book, Hilary :-) It's called Black and White Ogre Country and it's a short little volume of mainly pre-war reminiscences -- a lot to do with the countryside!
4 May 2016 at 02:38