Okay, I know my ROW80 goal of late has been to read all the books we own already. And I was doing really well. But how can anyone keep up when so many intriguing new books by already-loved authors are always coming out?

I put in a book order yesterday for the first time in many weeks -- there's a new Joanna Bourne, a new Neil Gaiman, a new Claire Legrand, and a new Simon Tolkien coming out! Not to mention I'll soon have to order the new JK Rowling, the new Louise Penny, and even a new Beatrix Potter! 100 years on -- isn't that amazing?

That's not the only reason I've been getting books -- I might be travelling to Kenya soon for work! I thought I should read a few Kenyan authors before I did so.

And there are two new releases and a cover reveal this week!


Discovering You by Brenda Novak 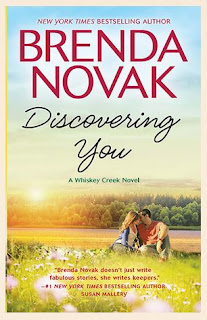 "There was a bloody man walking down the middle of the road."
What a great first line!

"Can she ever trust another 'bad boy'? India Sommers once had the perfect family -- until an ex-boyfriend broke in and shot her husband. Not only did that cost her the man she loved, a respected heart surgeon and the father of her child, she feels responsible. Charlie died because of the people she hung out with before she had the strength to change her life.
Just after moving to Whiskey Creek with her little girl, Cassia, to start over, she's learned that her ex-boyfriend's trial ended in a hung jury. He's getting out of jail; he could try to find her again. And that's not all that scares her. She's extremely attracted to her next-door neighbor, but Rod Amos is the handsome 'bad boy' type that's given her so much trouble in the past. If she got involved with him, her in-laws would sue for custody of Cassia.
India has to keep her distance from Rod—but the more she gets to know him, the more difficult that becomes."


I got to read an ARC of Discovering You, and am so glad I did. Been waiting to talk about this story! It feels like I've read all the Whiskey Creek novels, but actually, I haven't somehow I missed reading Dylan and Cheyenne's story and I haven't gone back to them yet. All that to say, this was my first story about the Amos brothers, and I'm glad I got to discover them through Rod. He's just the sort of tough-childhood survivor-instinct character that's interesting to read about. India too had to live through and learn a lot from her past life, and now has to fight her in-laws for custody of the best part of that old life -- I love the way Novak's story mixes the interpersonal stakes with the greater problems that need to be resolved; Rod and India not only have to fight for their happiness, they have to learn to trust in each other on the way.

Not to include a spoiler, but there's a teaser for another Amos brother, Mack, and his story with Natasha. I hope for their sake they can stay together, but I'm already intrigued to find out all about the struggles they'll undoubtedly have to go through first.

"If you have already preordered Discovering You, or you plan to purchase it this week, you can RSVP HERE for the party (no proof of purchase necessary; to make it easy, we'll just use the honor system). Entering your name and email address puts you on a special Discovering You launch party list, which means you'll get another newsletter a week from today filled with some of my favorite recipes, a FREE story for everyone and a list of all the randomly selected winners from the launch party list (including directions for claiming the prizes). ... I have over 100 prizes -- including Barnes and Noble gift cards, Amazon gift cards, Apple gift cards, Whiskey Creek loot, autographed books, jewelry, Laurel Birch bags and other great stuff"

All Fixed Up by Linda Grimes 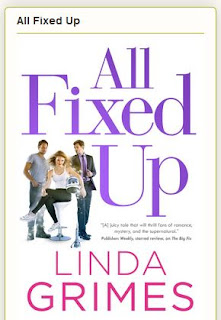 Ciel Halligan, aura adaptor extraordinaire, has a lot of experience filling in for her clients -- as them. A rare genetic quirk gives her the ability to absorb human energy and project it back out in a flawless imitation. She's hard at work, posing as a well-known and celebrated astronaut, about to make a stunning announcement on behalf of the space program... when the photographer documenting the job sees right through her aura. Worse, it soon becomes apparent that he not only knows Ciel’s not who she's supposed to be, but means her harm.
When Ciel's elderly Aunt Helen—also an aura adaptor—is murdered in Central Park, and the same photographer shows up at the funeral, Ciel starts to feel even more exposed. Then more adaptors are killed in the same way, and she becomes terrified her friends and family are being systematically exterminated ... and it's starting to look like she's the ultimate target. She turns to Billy Doyle, her best-friend-turned-boyfriend, for help, but when an unexpected crisis causes him to take off without a word, she's left to rely on her not-so-former crush, CIA agent Mark Fielding.
Staying alive, keeping control of her romantic life, and unraveling the mystery of why adaptors are being pursued becomes a harder balancing act than ever in this new Ciel Halligan adventure from Linda Grimes. 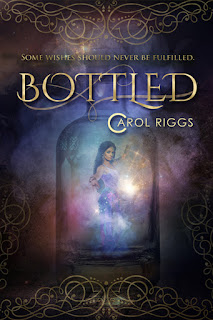 At seventeen, Adeelah Naji is transformed into a genie and imprisoned in a bottle. For a thousand years, she fulfills the wishes of greedy masters -- building their palaces, lining their pockets with gold, and granting them every earthly pleasure. All that sustains her is the hope of finding Karim, the boy she fell in love with as a human. When at last she finds a note from her beloved, she confirms he has access to the elixir of life and that he still searches for her.
But someone else also hunts her. Faruq -- the man who plots to use her powers to murder and seize the life forces of others -- is just one step behind her. With the help of a kind master named Nathan, Adeelah continues to search for Karim while trying to evade Faruq. To complicate matters, she begins to experience growing fatigue and pain after conjuring, and finds herself struggling against an undeniable attraction to Nathan.
As Faruq closes in, Adeelah must decide just how much she'll risk to protect Nathan and be with Karim forever. How much power does she really have to change her future, and what is she willing to sacrifice for an eternity of love? If she makes the wrong choice, the deaths of many will be on her hands.

Advanced Praise for Bottled: "Bottled has everything you could want in a story: humor, suspense, action, and romance. The twists kept me glued to the pages." -- Elizabeth Langston, author of I Wish and Whisper Falls

Carol Riggs is an author of YA fiction who lives in the beautiful green state of Oregon, USA. Her debut novel, The Body Institute, released September 2015 from Entangled Teen, exploring body image and identity. Her sci-fi YA, Safe Zone, will release from Entangled Teen in October 2016. She enjoys reading, drawing and painting, writing conferences, walking with her husband, and enjoying music and dance of all kinds. You will usually find her in her writing cave, surrounded by her dragon collection and the characters in her head. 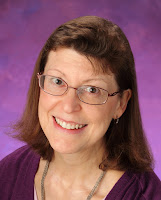 
And that is why the To Be Read pile never lessens...


What's in your reading pile this week?

Alex J. Cavanaugh said…
Congratulations to the authors with new releases.
Too many good books out there...
25 May 2016 at 07:26

sage said…
There are always many books on my tbr pile. I'm curious about your potential adventures in Kenya.
26 May 2016 at 20:38

Eden "Kymele" Mabee said…
I have surrendered to the fact that my TBR pile is only going to grow. It was hard for a while, but Fate has this way of making her intentions clear. My husband hasn't quite given in, but... we're working on that. :-D
27 May 2016 at 11:59

Hilary Melton-Butcher said…
Hi Deniz - and a new Winnie the Pooh ... oh gosh and going to Kenya for work - that will be amazing ... oh how I love Africa ... I heard a wonderful talk from Dr Lucy King from Oxford University - who is working with bees and elephants in Kenya ... I blogged about it:

Lucky woman is all I can say ... my father's sister lived out there and met her husband, who was the uncle I looked after in the last years of his life ... Kenya was magic for them ...

Good for you for doing your home work .. oh how I love Africa ..

Wonderful to read this post and know we'll be hearing more ... cheers Hilary

Ooh, thanks for the link, Hilary!