My last hodge podge post, full of little tit bits, was back in July.


Second, my 30 Things I Want To Do list.
I'm not going to update the list just yet, but I will note that of the bands I wanted to see, I had a chance to see The Divine Comedy last year, and have a chance to see Runrig this year, and I didn't attend last year and may not attend this year.
Is it bad to want to go back in time and see bands when they were touring the albums you loved? To not be as excited by their new songs?
I really wanted to see the Manic Street Preachers when they were touring my two favourite albums a couple of years ago, but that wasn't possible for different reasons (namely, new baby and new job). On the other hand, the Bluetones are touring their first couple of albums this year, and I'd really like to try to make it to one night!

I never saw the Cranberries live for mostly the same reasons. They came to a festival in Neuchatel last year, and I didn't go. Saddened to hear of the passing of Dolores O'Riordan. No Need to Argue is one of those albums I always go back to, with lyrics that have resonated for years.
I was trying to find an older post where I talked about this, the lyrics or tunes (or poems) that have stuck with you for years, but instead came across an old blogfest hosted by Alex: The Top Ten Countdown Music Blogfest! No Cranberries on my list, though I commented on another poster's list that "No Need to Argue is my favourite Cranberries album; so many of the songs still pop up randomly in my head, even when I haven't listened to it in a while". I'd share a video here, but I'm not sure that the videos currently up on YouTube will be around for long.


Instead of which, and third, I have some recipes!

From the Desserts and Drawings blog; links provided for each one, since the photos will be too small. 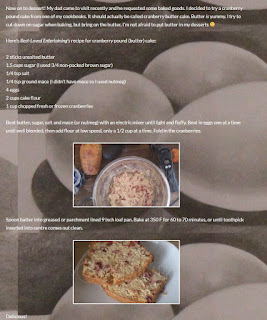 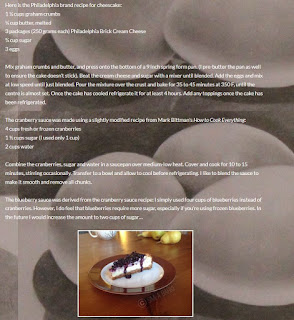 Finally, congratulations to all the authors who'll be published in the next IWSG anthology, Tick Tock: A Stitch in Crime !

Which song lyrics are stuck in your head?
Any good recipes to share?

Eden "Kymele" Mabee said…
I can relate to your wish to see band for their older music... I was thinking that when I saw the recent "Unplugged" version of Take On Me by a-ha. Not that the new version wasn't good, but the whole album the original came off (Hunting High and Low) was incredible (favorite song is Here I Stand And Face The Rain)... and I'm not sure all the pieces would take the same haunting twist Take On Me did.

Love the Manic Street Preachers but haven't listened to them in a while. Think I will... I've actually avoided the Cranberries since all the posts about Dolores. I can't listen to music in "memoriam" of the performer... though I can happily dig through interviews and listen to pieces that inspired their own works.
18 January 2018 at 14:02

Beth Camp said…
This is probably sacrilege, but I don't follow any bands. I enjoy music, but ... when we downsized, we gave up the big stereo system. I occasionally listen to Celtic or folk music (Spanish), but mostly prefer quiet. Now we are in Merida, I found a great new dish I'd love to learn to make called motuleños (tortilla with black beans, an egg, cheese crumbles, and a lovely tomato sauce over all). As to the list for ROW80, thank you for reminding me that editing counts! May the week go well for you!
19 January 2018 at 16:11

Hilary Melton-Butcher said…
Hi Deniz - I admire your knowledge about so many things ... fascinating to read up - I shall at some stage take some time out and spend time here with you on the blog linking across to the various things. I hope you get to achieve some of those 'wishes' for 2018 - take care and all the best - Hilary
21 January 2018 at 14:32

Deniz Bevan said…
Thanks for sharing, everyone.