New Books by Kait Nolan and Laura Bradbury, and RIP 2018

IP to Tim Conway and Doris Day, who passed away this week.

Within the last year of blogging, we've lost William Goldman, Scott Walker, and Dolores O'Riordan. I haven't compiled my RIP posts in a while, maybe I'll set that as a project for another day. I can add it to my lists...

The other day I splurged on some fancy sticky note stationery by Knock Knock, including a To Do list notepad, and an Awesome notepad: 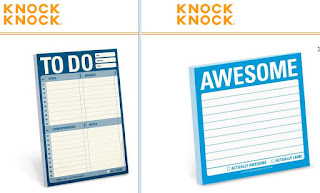 
I'm still hacking away at my scene for the May writing exercise on the Forum (fly-by ROW80 update!), but meanwhile, there are two new books out this month!


Dancing Away With My Heart by Kait Nolan, part of the Wishful series: 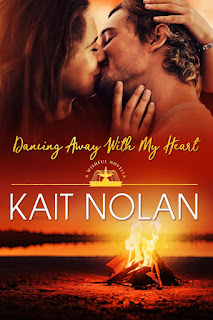 "Reunion Prom? Is this really a thing?

In Wishful it is. Lexi Morales never imagined her life would turn into the premise for an 1980s teen movie. But when her big high school trauma hit like a ton of bricks, she spent the next decade trying to hide the truth. After years of careful avoidance, she's back in town to care for her injured mother, just in time for the high school reunion she never planned to attend—a reunion that evokes memories she's tried to forget.

Wishful's friendly neighborhood photographer, Zach Warren, has no idea why he and his best friend drifted apart. But from the first, flashbulb moment he sees Lexi all grown up, she's all he can think about—and his thoughts keep straying right out of the friendzone.

Zach’s offer of temporary employment while she’s in town should be a perfect fit, but acting like she's never thought of him as more than a friend turns out to be harder than Lexi ever expected. All she wants to do is get through this with her secret—and her heart—intact. One thing's for sure: Lexi is NOT going to this prom.

But what if ten years is just the right amount of time for Zach to finally get a clue?"

A quick, sweet read in an inspiring small town!

Once I'd started this book, I couldn't put it down! I kept wondering how these two would ever break down the strong barrier of friendship they'd set up between them, to realise they could be something more.

Those moments of almost kissing were breathless. I'm glad their friends were there to support them at least. And even though this book can be read as a standalone, for fans of the Wishful series, it was so lovely to be part of Tara and Jace's wedding. A double helping of romance!

A Vineyard for Two by Laura Bradbury 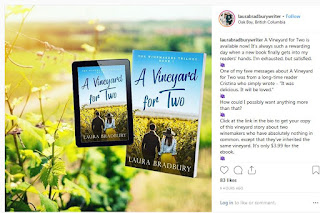 "Up-and-coming winemaker Cerise Desloires believes in soul mates. Trouble is, she’s sure she’s already found—and lost—hers. Now the young widow has inherited half the vineyard she considers her own, and she’s got one chance to produce a vintage that could make or break her career. But when the flashy, impetuous Clovis de Valois is revealed as heir to the other half, her dreams of independence are dashed into chaos.

Cerise and Clovis seem to be opposites in every way that matters. Can their passion for winemaking—and secretly each other—unite them beyond their differences? Or will their clash ruin the vineyard, and the hearts, they’re both desperate to save?"

I was rooting for Cerise and Clovis right from the first page of this book. Both of them are strong characters and strong-willed -- love the dilemma of her wanting her independence and thinking they don't need to be partners in everything, while he thinks you can have both love and independence at the same time.

And they're both hiding their soft centres! Does that make them sound like cherries or grapes? Both fruits are prominent throughout this book, which is sun-drenched and flavour-drenched. There's nothing better to transport you to late-summer in Burgundian vineyards, and the tension throughout is high -- will they or won't they? They must realise they're meant for each other! But the year's vintage -- including Cerise's secret wine -- is also on the line...

Also love the wine suggestions hidden within the story. Going to be ordering a Gevrey-Chambertin next time I need a bit of consolation...

Don't forget, Laura also has some gorgeous properties in France, among vineyards, that you can rent for an extended stay!

Do you enjoy small town romances? Or getting lost in vineyards?
What are some of your favourite story settings?

sage said…
Nice sticky notes. I remember my mom having Doris Day albums and, even as a kid, thinking she was very pretty.

Hilary Melton-Butcher said…
Hi Deniz - fun to treat yourself to the sticky note reminders ... while the Gevrey-Chambertin sounds delicious - even though it's breakfast time! Oh yes ... vineyard settings for stories - always glorious. Congratulations to both authors ... and great to know Laura has properties available to rent. Cheers Hilary
16 May 2019 at 03:07