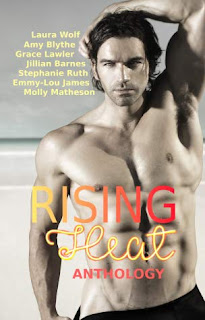 "Dreaming of summer lovin’?
Take your mind on a summer vacation with seven standalone, contemporary romance, short stories from these new authors.
Sweets come first (like every good meal!) and the hottest are saved for last.
There’s a little something for everyone with MF, MM and MMF pairings – and guides at the start of each story to let you know what’s coming.
No cliff hangers and an HEA every time.

HAPPY TRAILS by Laura Wolf
What’s in a name?
Divorced. Jobless. Homeless. Katherine’s at a crossroads, with a name she hasn’t worn since she was nineteen. Her solution? To follow the advice of her long-deceased mother to ‘find herself in the wilderness’. But when Katherine, an under prepared wannabe explorer comes across the attractive and much more experienced hiker Grayson, the wilderness gives her more than she bargained for.

STARLIT SHORES by Emmy-Lou James
Abbie Gregory has a secret, and it’s one she’s kept for more than ten years. Now that secret is compromised, with the very person she least expected quite literally crashing into her life. Matteo Romano hates secrets. But, the memory of a passionate summer romance brings him back to the place and the woman to whom he lost his heart. Once he discovers Abbie’s secret, will he be able to forgive? Or will their relationship be doomed for a second time?The starlit shores of the South coast of England offer the perfect place for romance...

HAIR and NOW by Stephanie Ruth
Cherry Armstrong’s on a mission to reinvent her life. Sure, her husband’s moved on with a younger, slimline version, but that’s no cause for major alarm. It’s high time Cherry spent more time on herself, and the things she wants to do. But travelling abroad can be a bit freaky on her own, and the modern world’s expectations for single women seems to include spray tans, washboard abs, and severe bikini line waxes. Cherry’s no coward, but can she really lay herself bare to all that?

ONE CHANCE by Molly Matheson
When friends become lovers, hearts are inevitably broken. Two years after her brother’s death, Ashley has adapted her life, her way. Until Stefan turns up unannounced, disrupting her comfort zone. Luckily, she only has to protect her heart for the weekend, until he leaves her again. Stefan thought sleeping with his best friend’s sister was his worst mistake, until he let grief and guilt keep him away for far too long. Now he is back, for good. He just has to convince Ashley to let him back into her life.

SUMMER RAIN by Amy Blythe
Off to Amsterdam for a long weekend, Kate aims to leave her baggage behind. She's travelling light: naughty knickers and no expectations. Well, almost. Johannes can fix any bike, but he can’t find the tools to get his life back in gear. Moving home feels like a mistake, but then Kate shows up...

BARRIER BNB by Grace Lawler
Alex Vandermeer has a week to save his carefully curated life as an in-demand muso based out of Hell’s Kitchen, NY. He flees New York’s winter for artistic isolation on New Zealand’s Great Barrier Island. It’s his first Air BNB and it’s definitely not what he expected. Tane Morrigan is mourning the loss of his father, ‘The Boss’, and beginning to understand the freedoms and responsibilities of being the head of his family business. The last thing he needs, when he heads to the family Bach (holiday home) is a brash, demanding, sensitive artist... or is it?

I DO, I DO, I DO by Jillian Barnes
Emily Jones is about to walk down the aisle to marry the loves of her life. That’s right, two of them. Harry and Jack are waiting for her at the altar, ready to commit to her and each other, for as long as they all shall live. It’s not legal, but it’s very real, and as family and friends gather to witness the ceremony all Emily wants is her mother’s blessing, and not to self-combust before their wedding night."

A sweet -- and steamy -- book of microromances, featuring great settings (New Zealand! Amsterdam!) and fun and witty characters. Just right for reading at the beach or, if it's winter where you are, on a snowy vacation day as you dream of summer.

The first few stories are sweet, and the last two quite steamy. The final story was my favourite of the bunch. It leaves you with a warm glow that's just the sort of HEA you want to walk away with.


Updates for National Novel Writing Month and A Round of Words in 80 Days (and Insecure Writer's Support Group Day!) coming next week! School is quite busy at the moment...

What's on your wishlist?