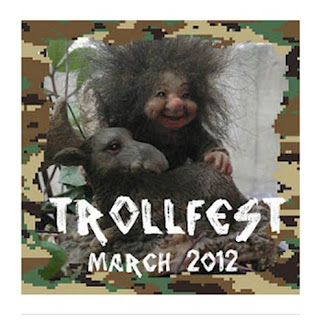 Siv Maria has a lovely post about Norway and trolls and how she "can sit on [her] front steps, have a conversation with a moose and listen to a waterfall while drinking [her] morning coffee". To celebrate her Blogiversary, she's hosting a Troll Fest this month! All you have to do is share a story about your first blog post or post it again.

It's almost as though I didn't realise other people could see my posts... My second post was a little more focused:


Friday, 31 August 2007
What I Am Writing
This year I have finished a short story, begun a novel, and every once in a while I take out an older novel and tinker with it.
The finished novel is tentatively entitled An Arnavutköy Spring, and is about a young Greek girl in pre-WWI Istanbul who falls in love with a dashing travelling musician from Brittany.
The work in progress does not have a title yet (watch for a contest - with prizes! - coming soon) but for daily purposes, is referred to as Austin and Kedi. Austin travels two millenia back in time to Ephesus in 41 AD, and helps to ensure that the Roman invasion of Britain actually takes place. His friend on this journey is a grey cat named Kedi. I am halfway to my goal of 80,000 words - woo hoo!

This story eventually became the Middle Grade novel The Face of A Lion, which went out on queries last year. I'll be editing An Arnavutköy Spring soon, after I finish the current round of edits on Rome, Rhymes and Risk (only one chapter away from meeting that goal!). And Austin's story is set in 43 AD, actually...

And in exciting news, The One Ring has a new Google calendar: the Today in Middle Earth calendar. Here, for instance, is today:

Hope they start adding items from the First and Second Ages, too!
Don't forget to vote in Rach's Second Campaign Challenge! My entry is one post below...

Unknown said…
Nice ! I love how people's first posts are usually short and sweet and you can see the blog seeds being planted.

On the subject of trolls, I once convinced a housemate (early-20s) that trolls were real creatures. It took a while but he eventually came round to the idea.
11 March 2012 at 08:49

Unknown said…
I just love your first post, it looks like the notebook I have sitting by my computer :) Sometimes blogging is just talking to yourself and hoping to share your ideas with someone who is willing to take the time and listen. Thanks for sharing with us and for spreading the word about Trolls. Jamie,very funny...The only thing that stops reality from changing form is lack of imagination :)
11 March 2012 at 08:58

Anonymous said…
My first few posts were also on the short side. I had my novel-writing style down, but I was finding my blogger voice.

The Daring Novelist said…
Oh, geeze, my first couple of blogs have been long deleted. I can't remember my first post.

I suppose, though that before there were formal blogs, I did something bloglike for a writing dare.... maybe I'll post something about that tonight.
11 March 2012 at 11:16

Carol Riggs said…
Ha, thanks for sharing your first posts! Congrats on being only 1 chapter away from meeting your editing goal for RR&R. :) I used my initial posts as an online journal to myself, with boring musings about what I was writing. No one was reading it back then anyway!
11 March 2012 at 14:01

Kate said…
What a cute idea! You've had your blog a lot longer than me. Although, I have a super secret online diary that I've been writing in for a very very long time. Like 1999. Seriously. :)

I actually didn't know what to post and used to share posts from other people just to get my blog going! I was astonished when people started commenting!
11 March 2012 at 17:08

Ali Dent said…
I love your first post. Short and sweet. Easy to read and easy to check off. You've been a busy girls and your product shows it. Congrats on The Face of a Lion and best wishes on An Arnavutköy Spring soon.
11 March 2012 at 17:09

Robin M said…
What a great first post. Amazing how we've all evolved since then. Fun to go back at look at how we started out and where we are now. You've made great progress.
11 March 2012 at 21:40

Nadja Notariani said…
That was great! I think it's nice to look back and see all that you've accomplished since beginning, right?
13 March 2012 at 14:39