New Release from Catherine Mckenzie, A Walk in Montreal, and Tolkien Fandom Interviews 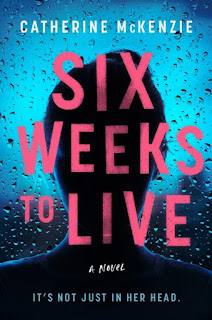 Jennifer Barnes never expected the shocking news she received at a routine doctor’s appointment: she has a terminal brain tumor—and only six weeks left to live.

While stunned by the diagnosis, the forty-eight-year-old mother decides to spend what little time she has left with her family—her adult triplets and twin grandsons—close by her side. But when she realizes she was possibly poisoned a year earlier, she’s determined to discover who might have tried to get rid of her before she’s gone for good.

Separated from her husband and with a contentious divorce in progress, Jennifer focuses her suspicions on her soon-to-be ex. Meanwhile, her daughters are each processing the news differently. Calm medical student Emily is there for whatever Jennifer needs. Moody scientist Aline, who keeps her mother at arm’s length, nonetheless agrees to help with the investigation. Even imprudent Miranda, who has recently had to move back home, is being unusually solicitous.

But with her daughters doubting her campaign against their father, Jennifer can’t help but wonder if the poisoning is all in her head—or if there’s someone else who wanted her dead.

I got to read an ARC of this book through NetGalley! I also read it in almost one sitting (I would have stayed up all night, but staying awake is not so easy when tired from kids!), because the twists and turns kept me wondering what would happen next. McKenzie's really good at writing unreliable narrators. You never know quite whether the protagonist is telling the whole truth... I empathised with each of the characters, too, which made the ending all the more surprising and satisfying.

I'd have only one quibble (and I had the same issue with Gone Girl): the procedure mentioned for IVF is not feasible. There's no way to use a spouse's sperm without having the spouse present and a signatory to consent forms. But this doesn't detract from the story or from the machinations of the guilty party! Nor from the deft and sensitive way McKenzie deals with the implications of the greater threat that Jennifer is facing. I'm still thinking about the book days later. It'd be perfect for a book club discussion!


Here's an idea I got from a recent Patreon post by Alice Fraser, in which she wrote of a walk "to bondi from the city" (Sydney, Australia).

I thought of detailing the commute I used to do when going in to the office each day. Or maybe the walk to work I used take in Istanbul, back in 2002. But I think I'll save those for a future post and talk of how I used to walk home from McGill University, along Sherbrooke Street in Montreal. 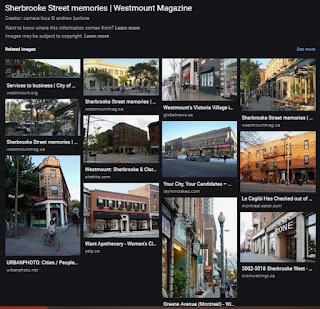 I've decided not to wait for the bus today, as for once it's not too cold. There's a smell of snow in the air. Down that road is the cafe I work at; I've got a shift tomorrow. Up that road is the narrow alley where we used to sometimes turn in, to pick up my father from the university. It always seemed a long drive from the house, and such a mysterious road. Your world gets smaller and more manageable as you grow.
Walking along, passing some main streets. Wondering if I have time to turn down and visit the secondhand bookshops and recordshops today. Well, time I have, but maybe not enough money. And there's the Museum of Fine Arts. I was there on the weekend.
Then there's the building where I had my root canal done, back in high school. Walking down a slippery hillside in the middle of a snowstorm, falling, tearing my stockings, bloody at the knee -- and rather than going home and nursing my wounds, I still had to go to the dentist!
There's the wee art gallery where I saw my first Emily Carr in person.
Getting to Atwater Avenue. My previous schools are up the hill. Down the other way is a yellow house I've always loved. And the sculpture of the man reading a newspaper (Catching Up by John Seward Johnson). A few blocks on, there's a house that inspired a novel (also loosely inspired by The Stone Roses). Mount Pleasant always reminds me of the Crowded House line.
Now the park, with the ancient willow tree we used to climb.
I'm in our neighbourhood. I recognise the houses of friends and former boyfriends. The ice cream shop I once worked at. The tiny depanneur which was the first shop I ever visited on my own as a kid. The stationery store (but I still have no money). Every crack in the sidewalk is familiar here, every tree, every front garden.
I look up, and see my window.

In other news, I'm Tolkien Fandom Interview No. 295 at Marquette University! So glad I had a chance to do this at Tolkien 2019.

Which walks hold memories for you?

Jeff said…
A lot to pack in such a little amount of time! Sounds like an interesting concept for a story.
11 February 2021 at 14:31

Hilary Melton-Butcher said…
Hi Deniz - yes ... that sounds a good read - interesting ... but understand your notes on IVF ... not to say I have any experience. Sharing your walk with us from McGill Uni ... and your first sighting of an Emily Carr painting - I've still got lots of books about her to read. Stay safe ... Hilary
15 February 2021 at 12:03